It's my handsome husband's birthday today. And I feel like a schmuck, I completely forgot until late last night. Ideally, I would have made him a big (but healthy), complete breakfast. Instead, I made french toast. My daughter and I woke up early and made him a card and a water color picture, her specialty. I'll have to brainstorm this morning and then get him a gift at some point today. I'm usually so on top of gifts because my love language is giving gifts. I LIVE to give gifts. I will spend hours coming up with the perfect gift, or making something special. Ya, I failed this year.

Here's a little story for you, I think I fail every year. His first birthday since we were married, I was hoping I was pregnant. I woke up early, took a pregnancy test, and prayed it was positive so I could wake him up and tell him he'd be a daddy. Nope. No such luck. I had to go out and get cologne or something that year. He also had to console me because I wanted to be pregnant so bad, men hate crying, poor guy. The second birthday I was pregnant, and I was so grouchy and uncomfortable and miserable to be around. I don't even know what I got him that year. I'm sure I've gotten him presents he's liked in the past two years, but I don't even remember. This year, I'm going to make it a great birthday for him! It's my goal!

Anyway, french toast is easy. I can't believe I'm even making a post about it. But maybe there's someone out there who doesn't know how to make french toast? Heck, who knows! 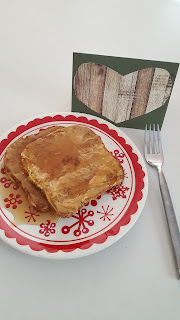 My daughter and I brought him the french toast, card and picture to him, and ate in bed with him. Probably not the best idea with the syrup, and sticky kids. But it was fun! We used Killer Dave's sprouted bread, and the Kirkland brand pure maple syrup. I also like to microwave frozen berries, that would be good on top too!

What would you add to your french toast? Leave me a comment!
Posted by Kait Stoker at 10:16 AM

Email ThisBlogThis!Share to TwitterShare to FacebookShare to Pinterest
Labels: Recipes